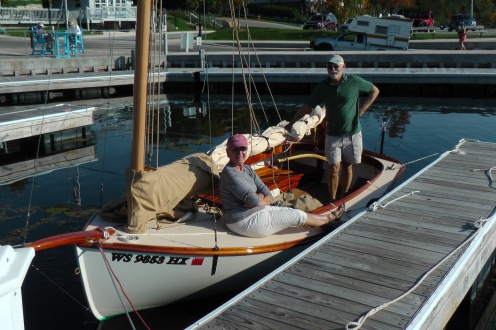 Wooden boatbuilding is not a dead skill.  Amateur boatbuilders are a work across the country and Wisconsin building kayaks, canoes, pulling boats, motor boats and sailboats. This year we have a number of terrific home-builds, from canoes and kayaks, to the terrific Glen L Torpedo, to these great sailboats.  These are not kits- they are boats built by hand from a set of plans and a pile of material.  Take a look at some of the latest registrants in our sailboat category.

Pictured above is Li’l Boat whose home port is Egg Harbor, WI.  A 15′ gaff-rigged cat boat designed by Joel White, the boat is strip built with 7/16 inch Atlantic White Cedar sheathed with epoxy and finished with mahogany brightwork.  The owners modified the plans somewhat, changing the outer stem, after deck, the wrap-around coaming, seats, and rudder.  They even cut all of the cedar strips themselves!  10 years in the building, she’s a beauty!

This is a Olsever Faering built from plans by Selway-Fisher, England.  It’s a traditional craft often seen along the west coast of Norway.  With two rowing stations allowing for four oars, the Faering (faer=four) carries a spritsail to make life easier.

A boatbuilder’s workshop.  This is a Penobscot 17 in the early stages of construction.  You see her here on a strongback assuring a fair and straight hull.  The Penobscot 17 was designed by Arch Davis and she’s a plywood lapstrake sailboat.  17′ long she weighs only 350 pounds.  Her owner completed her in July 2015 after working for roughly 18 months.  She’s built of Douglas fir, ash, Sitka spruce, mahogany, pine, okoume plywood and cherry.  The cherry, ash, and fir were harvested in east central Wisconsin. Very pretty. 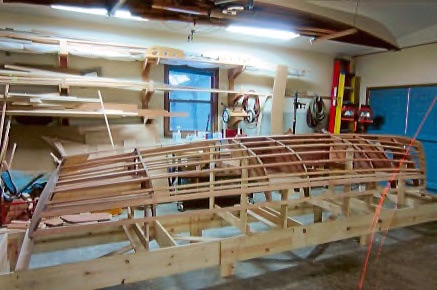 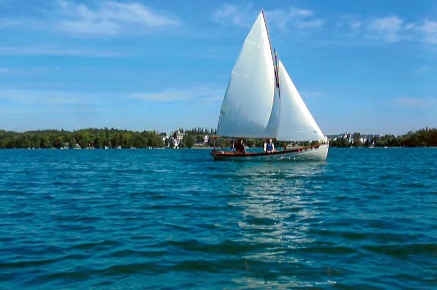